Here’s why you should change your tyres in axle pairs

If your tyre is worn or you have a puncture, you must replace it right away. But you may have heard that it’s best to replace your tyres in axle pairs—and want to know if this is true.

Simply put, yes, it is. And not doing so can cause damage to your car and hinder its performance — especially in the wet. Having said that, there are some exceptions where common sense prevails.

In this post, we’ll give you a complete rundown on why you should replace your tyres in axle pairs. Along with when you don’t need to. But first:

What is an axle pair?

It’s simple. An axle pair — or axle set, as it’s also known — is the pair of wheels that share the same axle.

Most cars have two axles (front and rear). From each axle, the wheels rotate while the axle shaft stays perpendicular to the road. Sometimes, the entire axle shaft will move to turn the wheels, though this is less common.

Why does this matter for tyre replacement?

Okay, so imagine wearing a new shoe on your left foot and a heavily worn shoe on your right foot. Not only would the right shoe lack grip and support, but over time, it could cause injury to your leg, foot or ankle.

It’s a similar story with your car’s tyres. If one tyre in the axle pair is heavily worn or has less pressure, it puts extra weight onto the axle shaft and hub bearings. Short-term, you’ll have less grip. And it can also throw off your wheel alignment and cause new tyres to wear out quicker. Because of this, your car’s performance will suffer.

The long-term effects are more serious, mind. The uneven tread will cause different parts of the axle system to wear down to a point that it will need replacing. Which, if you didn’t know, is a lot more expensive than buying two new tyres.

Having the same tyre tread matters

Your tyres are the only point of contact between you and the road. So as well as making sure they’re in good condition, you must have equal tread depth across the axle pairs. (Or, across all four tyres if you have an all-wheel-drive car, but more on that later.)

The tyre’s tread has many jobs, and one of the most important is to channel surface water. If the tread depth is too low, the tyre won’t be able to channel water, and you’ll experience what’s known as aquaplaning.

This also happens if two or more tyres have a different tread depth or pattern. In this instance, they’ll still channel water, but at different rates. As well as affecting performance in the wet, it will also lead to uneven pressure on the axle shaft.

Oh, and remember, never combine summer, winter and all-season tyres. This will put even more pressure on the axle shaft as your tyres fight one another for grip.

The benefits of changing tyres in axle pairs

The benefits aren’t entirely performance-led, though. Changing your tyres in axle pairs will also save you money. Okay, not initially, but long-term. Your new tyres will last longer and prevent damage to your car’s axle shaft. What’s more, the chances of you needing to splash out for performance-enhancing fixes like wheel alignment adjustments are less too.

What about four-wheel-drive vehicles?

It’s a slightly different story if you have an all-wheel-drive car. Here, you might need to replace all four tyres when they wear out, or if you get a puncture. This is because all four wheels drive the car — rather than two.

If you’re replacing all four tyres, make sure the maximum load rating doesn’t exceed the number in the manufacturer’s handbook. Ignoring this could damage the axle shaft and cause the tyres to wear out quicker.

Should I replace all four tyres if the rest are new?

If you’ve fitted new tyres recently and you get a puncture, you shouldn’t need to replace them again. But without knowing the exact state of your tyres, it’s difficult to give you a definitive yes or no, as it will depend on how old they are, how many miles you've covered and how you drive.

If they’ve lost a few millimetres of tread, you might need to. But the best thing to do is stop by your local First Stop garage and have one of our technicians take a look.

What’s more important than making sure the tread is the same on each axle, is making sure it isn’t worlds apart. For example, you don’t want one tyre with 7mm of tread and the other tyre with 2mm. If the tread differs entirely, your car’s performance in the wet and under braking will suffer. Here are the numbers to back this up.

A test carried out at MIRA in 2018 found a 30% difference in wet braking for a nearly new tyre (7mm of tread) and worn tyre (2mm of tread). The test featured eight tyre brands on a range of vehicle types, including saloons, SUVs, hatchbacks and sports cars. But the results were similar across the board: between 15-30% better with 7mm tread than just 2mm tread. 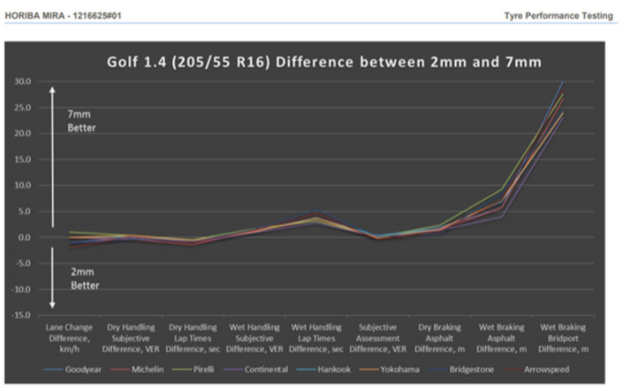 So what does that tell you? Well, fundamentally, that having uneven tread on the same axle is bad for your car's braking performance. Though it’s not just this. It’s likely that a car with uneven tread will naturally pull to one side, affecting cornering and manoeuvring.

A few things to remember

So that’s everything you need to know about replacing your tyres in axle pairs. But before we finish up, here are a few final tips to takeaway:

And remember, if you need a new set of tyres, First Stop has a wide range of the best makes and models and we can fit them for you too.